Susie Essman is Bringing Comedy Back to the Catskills 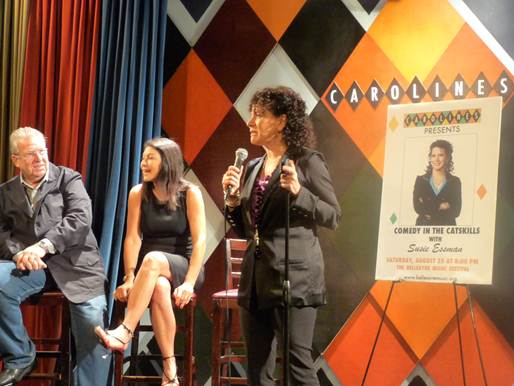 Catskills at a press conference held at New York City’s Caroline’s on Broadway on June 7.

owner Caroline Hirsch (center) were also on hand to talk about the upcoming event.

NEW YORK, NY– June 7, 2012 – Comedienne/Actress Susie Essman’s Catskills Benefit Comedy Concert set for August 25th at the Belleayre Music Festival, shares the message that the region is “open for business” and remains an arts and cultural hub for tourists and residents (having rebounded after last year’s Hurricane Irene last year) it was announced today at a press conference hosted by comedy impresario Caroline Hirsch of the world renowned Caroline’s on Broadway.

Proceeds from the event will go to the Catskills Park Resource Foundation, which was founded following the devastating aftermath of Hurricane Irene, to promote and support the Catskill region tourism and travel industry.

Susie Essman is best known for her role as the wild and wacky Susie Greene for all seven seasons of the critically acclaimed HBO comedy series, “Curb Your Enthusiasm.” Her hilarious bouts of withering sarcasm and uninhibited insults have become her character's trademark. She is also a featured headliner at Caroline’s on Broadway comedy club in NYC.

Her appearance at Belleayre will be an "adults only" event, with the promise of a full evening of off-color, uproarious humor.

“I have so many gay friends that have moved up to the Catskills.  You can tell because all of the restaurants and hotels have been gorgeously redecorated,” said Susie at today’s press conference.  “The Catskill region is the most beautiful place in the world, and let me tell you, I have been everywhere; you don’t have to go to Italy for a great vacation. There is so much natural and cultural beauty in New York. I encourage everyone to visit the Catskills and rediscover your own home.”

The concert will begin at 8:00pm on Saturday, August 25, 2012 at Belleayre Music Festival.

For information visit: Belleayre Music Festival to purchase a Special Benefit Ticket for $200 which includes premier seating and a private champagne reception after the show with Susie.